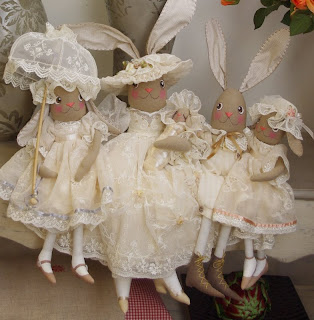 It was my lingering wish to make a lacy umbrella and a hat with flowers. And at last – I've got a chance to do it!
A happy Italian family! )) 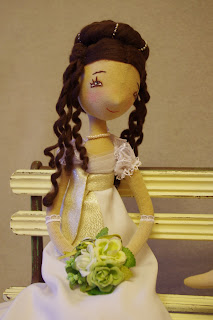 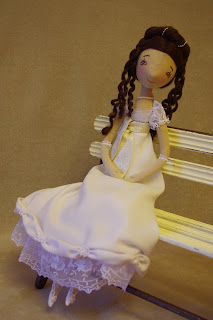 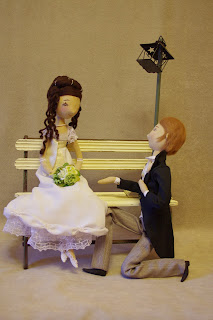 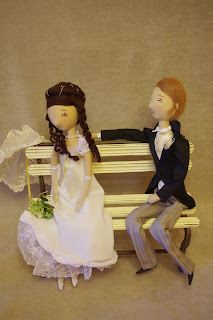 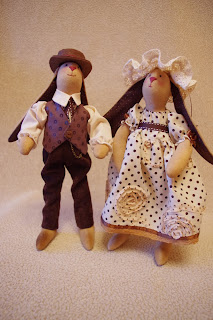 These two rabbits were ordered for decoration of a chocolate shop-window. 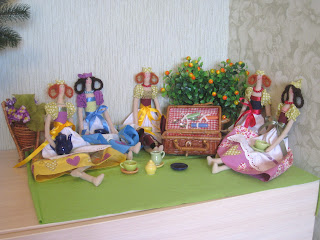 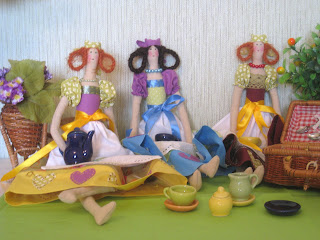 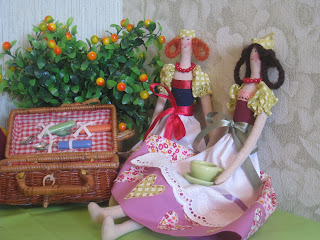 Kitchen Angels decided to make a farewell party. They'll fly away to their new homes soon, where they'll snug and bring coziness to kitchens and gladden their new owners. 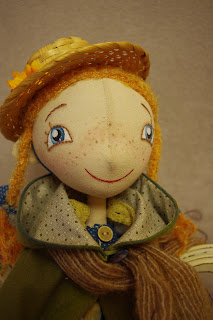 This doll was created on the 3d of May , it turned out to be International Sun Day!
Read more »
Posted by nkale at 8:47 PM 2 comments: 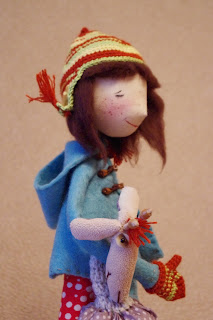 I love Holly Clifton-Brown so much! She paints alive characters – textile dolls, and my favorite Raggedy is too from one of her illustrations )) 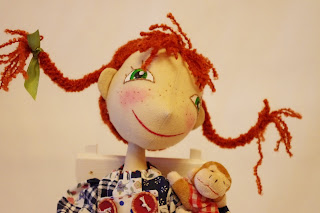 Here is my new Pippilotta, 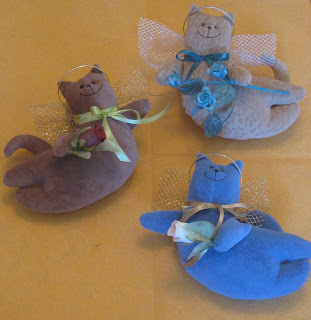 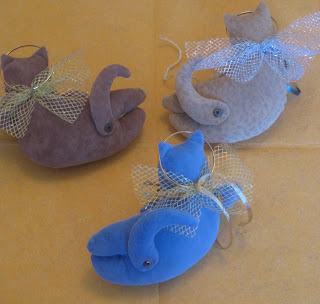 Look, what I've got for you-
A bunch of cats - brand-new!
They are very fresh and sound!
They won't fade or droop from drought!


Daffodils and tulips,
Roses and daisy -
Flowers in the garden-
Are not so amazing!


Cats have paws and whiskers,
Tails, gentle fur -
They are very pretty,
Oh, and how they can purr!

Take my bunch of kittens-
Put it in a bowl-

I've made this bunch of cats
With all my heart and soul! 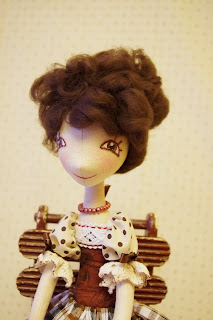 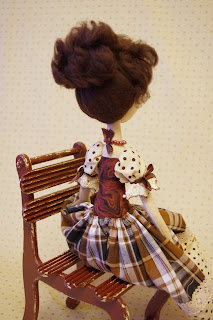 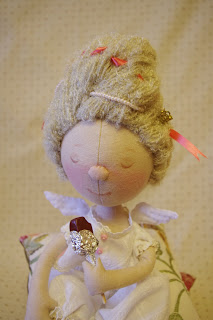 What a great joy it is when at last among all the other orders (often repeated) appear a long-ago contrived, long-awaited (and long-awaiting?) doll! (thus must feel the heavily pregnant mum) And how the girl is happy to come into the world! Please, meet Lisa, the Little Princess! 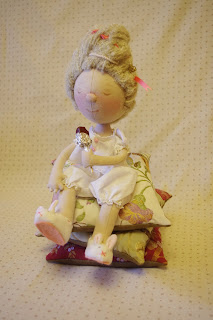 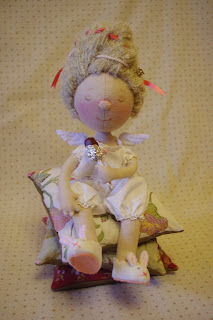 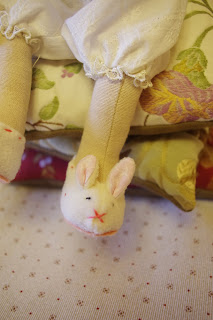 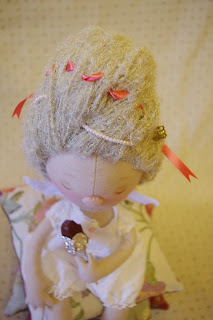 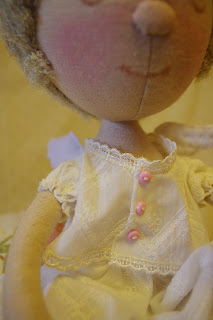 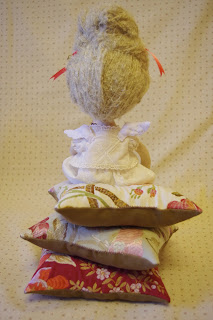 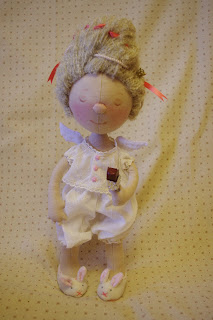 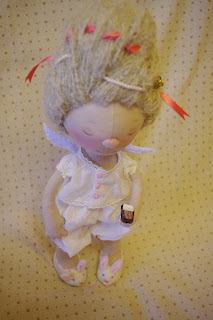 When I just started to make dolls I came across one interesting artist on the Internet- Yevgenia Gapchinskaya (Евгения Гапчинская). so I dedicate Lisa to her. )))

Tutorial – How to make Tilda Flying Cat (some tips from Nkale) 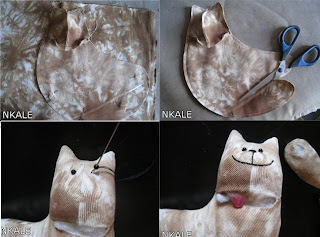 I've seen already several different Tilda Cat tutorials, but yet I have some sewing tips to add that would help you to create this lovely Tilda Cat more easier and quicker.

Attention: the fabric should be firm enough, not stretching in one direction (that's why if you want to use jersey, first apply flieseline). I like to make Flying Cats of jean fabric (it' s really great to use old jeans of different colors) and of expensive furniture velour.

And here's the first tip: though I don't baste parts (I just pin them together across the stitch), but if you are not experienced enough you'd better do basting first.

1. We don't cut into patterns all the parts at the same time, we do everything step by step: Start with the Cat's MUZZLE – Folder the piece of fabric the right side in, pin together, trace around the pattern piece (don't forget to follow the grainline of fabric), sew the middle line (it would be then the center line of the muzzle), then cut the part out.

trace the pattern of the muzzle on the other side

First goes the front- side part of the body. We trace around its pattern on the wrong side of the fabric, and cut it remembering to include ¼'' seam allowance (3-4 mm), (we don't cut the paws out!)

ATTENTION! Don't forget to follow the grainline of fabric, otherwise the body will distort after you fill it with the stuffing.

and sew them with short stitches (2-3 cm long)on the sides (don't forget to secure the stitches making reverse motion so that the seam doesn't loosen while stuffing).

ATTENTION: there must be left an open gap in the middle through which we will then stuff the toy.

smooth down the muzzle and the ears, pin the parts to the fabric

and sew the part around the contour without leaving any open space.

ATTENTION! That's my another sewing tip: if you leave an open gap for stuffing somewhere in the contour of the body it will be then very hard to conceal this place no matter how neat you sew it. That's why I leave open gap for stuffing on the neck of the Cat and then disguise it under a ribbon. That's the catch!

Notch the corners so that after you turn the body out, the seam doesn't ruckle.

3. PAWS and TAIL we make from the remaining pieces of the fabric.

Attention: these parts we cut on the bias (thus they will better keep form and easier turn out)

Then with sharp scissors we make cuts, turn the parts right side out, fill them with stuffing and hand-stitch carefully with the thread the same color as the fabric.

The tail can be turned to the different sides - it depends on what side you make a cut. I never know beforehand which side it will be - I like surprises!

4. Fill the Cat's body with stuffing through the gap

and while the gap is open we attach eyes-beads (thus we can hide a knot).

IMPORTANT: first we fix the thread on the back of the neck and then we bring it to the front side of the muzzle;

then we sew on the bead and return again the thread to the back of the neck, pull it and fix tightly – thus we make the eye-beads sunken (not protruded as lobster's eyes),

Do the same with the second eye-bead.

After that we embroider the nose and the Cat's smile

put a heart inside

stitch the open gap for stuffing.

5. Now we fill the paws and the tail with stuffing,

6. Then we need to attach the paws ant the tail: first pin them to the body so to place them correctly,

after that we hand-sew them on with buttons.

7. Now we decorate the seam on the Cat's neck with a ribbon.

sew around the contour,

notch the acute angles, make a cut in the middle,

turn it right side out and fill a little bit with the stuffing,

baste around the contour and hand-stitch the gap. If you wish to aromatize the Cat you can put inside the wings some vanilla-lavender-cinnamon-mint-juniper or anything else.

We hand-stitch the wings (and at the same time fix the ribbon so that it doesn't move) and make the tab for hanging using flax or hemp string.

9. Put something into the Cat's paws (a bunch of flowers, a fish, a bell or a heart)

10.The Flying Cat is ready – pleased and smiling!

Enjoy your sewing! And I'm glad to answer your questions!

My Cat Goes Flying Through the Air

I didn't used to see him fly,
like Superkitty, through the sky.
He used to only lie around
upon my bed or on the ground.

But now he's like an acrobat;
the coolest ever flying cat.
And how'd he get this great result?
He built himself a catapult.